Armenia is not doomed! 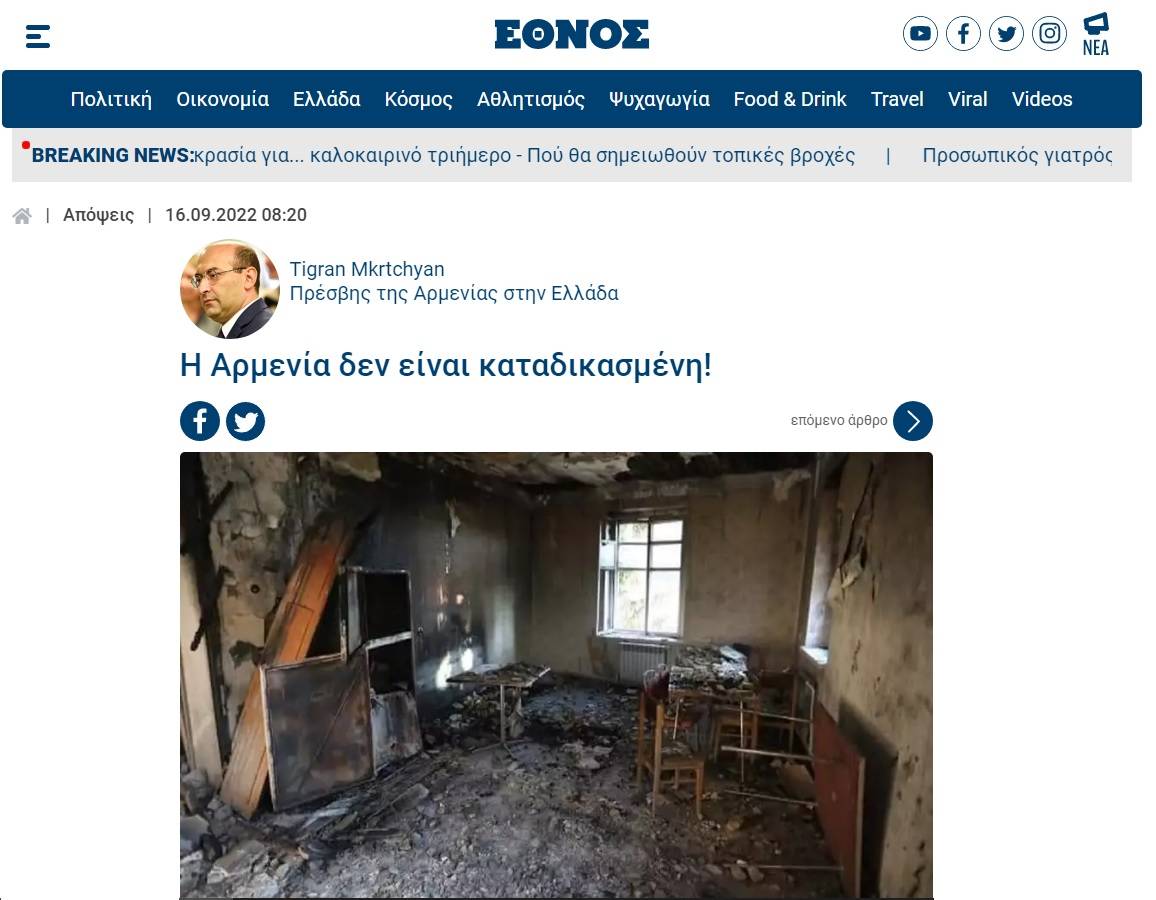 “Our historical lands are the Erivan khanate (i.e. Yerevan), the Goycha (i.e. Lake Sevan) and Zangezur (i.e. Syunik) Mahals. The time will come when we will live there. I believe in and am sure of that. To achieve this, each of us has to make an effort.”

A few years ago I could not have imagined that I would start an article with a quotation from the President of Azerbaijan. But if history has taught us anything, it is that we should never ignore the threats or any other types of messages coming from the handbooks of dictators.

Following the 44 days-war in Nagorno-Karabakh, the Azerbaijani leader has renewed his attempts to dismember Armenia and “return to historical lands”, although one might wonder about “historical” claims of a state, created in 1918, i. e. Azerbaijan, has towards another state, present on the political maps of the world since the 6th century BC, i. e. Armenia. But this means little to a leader, who has a very different view of the principles of international law and who has time and again reiterated his belief that might is right.

It seems also that the ceasefire statement from 2020, November 9, signed by the Presidents of Russia, Azerbaijan and the Prime Minister of Armenia, that put an end to the Second Karabakh War, has been interpreted according to this thinking. The statement mentions the word “corridor” once and that is done in the context of the Lachin Corridor connecting Armenia with Nagorno-Karabakh. Nevertheless, this has not kept the Azeris from mistaking their fervent desire for reality - i.e. for access to a “corridor” (with the right of extraterritoriality) connecting eastern Azerbaijan to its exclave of Nakhijevan (and, more importantly, to Turkey). For starters, article 9 of the above-mentioned statement reads:

By misreading and misrepresenting this article Azerbaijan, backed by its main supporter - Turkey, has conducted a policy of intimidation and blackmailing against Armenia.

Obviously, this is why on 13 September 2022 at 00:05 local time, Azerbaijan launched a large-scale military aggression in several directions from the eastern part of the Armenia-Azerbaijan border. The Azerbaijani armed forces, using heavy artillery, MRLs and combat UAVs, have started intensive shelling of the cities of Goris, Jermuk, Vardenis, Kapan, Sotk and nearby villages. At the time of writing of this piece, Azerbaijan still continues its attacks on the Armenian soil, targeting not only military, but also civilian infrastructure. As of September 14, 105 Armenian soldiers have been confirmed as killed, many more have been injured, 10 square km of territory of Armenia has been occupied by Azerbaijan. I might add that two of the young boys killed, defending their fatherland, are from Aragatsavan, a village near the Armenian-Turkish border, where my grandparents moved in 1953 (my family is originally from Erzurum) and where my father grew up. These figures may rise as long as Azerbaijan continues its aggression. The map presented clearly shows that the attacks are happening inside Armenia, in the eastern and southeastern areas of Armenia.

Armenia is under attack! The sovereignty of Armenia is put under question! Armenia has for the first time appealed to the United Nations Security Council for an urgent meeting. The results of this or any other international discussions can not be pre-judged, but I refuse to accept that Armenia is doomed. It is true that Armenia’s heroic soldiers are the only “obstacle” standing against the Azeri invasion, but there are several steps that could and should be taken by the international community to stop a full-scale war.

First of all, targeted statements condemning the attack by Azerbaijan on the sovereign territory of Armenia should intensify (the United States, France, Canada, Cyprus, Luxembourg, and many others, as well as European Parliament Members have issued addressed statements identifying the aggressor and urging for an immediate cessation of hostilities). Any other statement putting equanimity between an aggressor and its victim, all sorts of “political correctness” appealing to “both sides” are literally enabling the aggressor to act in an atmosphere of impunity and thus cause more destruction and death.

Second, purely economic interests are not sufficient for continuing “business as usual” with a state which has made a mockery of international law, which is competing with other dictatorships in its abysmal level of human rights and lack of any trace of democracy.

Thus, essential revision of all types of communication and relations with Baku is a must. On its 30th anniversary of relations with several countries in Europe the Azerbaijani diplomats are not talking about shared values, but about their energy resources and their importance to Europe, especially in light of the looming energy crisis. Since when has oil become a value? Why should Azerbaijan be seen as a reliable energy source for the world when its regime type, the amount it offers, as well as the route (running through Turkey) can be assessed as anything but “reliable”?

Third, if appeals to stop the attacks against Armenia fail and the aggression continues, support to Armenia should increase and sanctions be applied against Azerbaijan.

After the start of the attacks on Armenia, a western analyst wrote in desperation that “a nation that faced genocide in 1915 cannot find peace in 2022.” This is the sad truth and it is also true that Azerbaijan poses an existential threat to Armenia and Nagorno-Karabakh, but I cannot accept that there is no hope for peace. Peace must be imposed and, in order to accomplish that, Armenia should not and cannot act alone. The steps mentioned above, if applied consistently, can stop the expansion of hostilities into something more catastrophic - a large-scale war. But for that to happen, more consistency, straightforwardness and principled stance is needed around the world, on multilateral and bilateral levels. On all levels, actually.

Ambassador of the Republic of Armenia to the Hellenic Republic